Power Essentials Part 2: X-Factor In The Backswing? Not So Fast 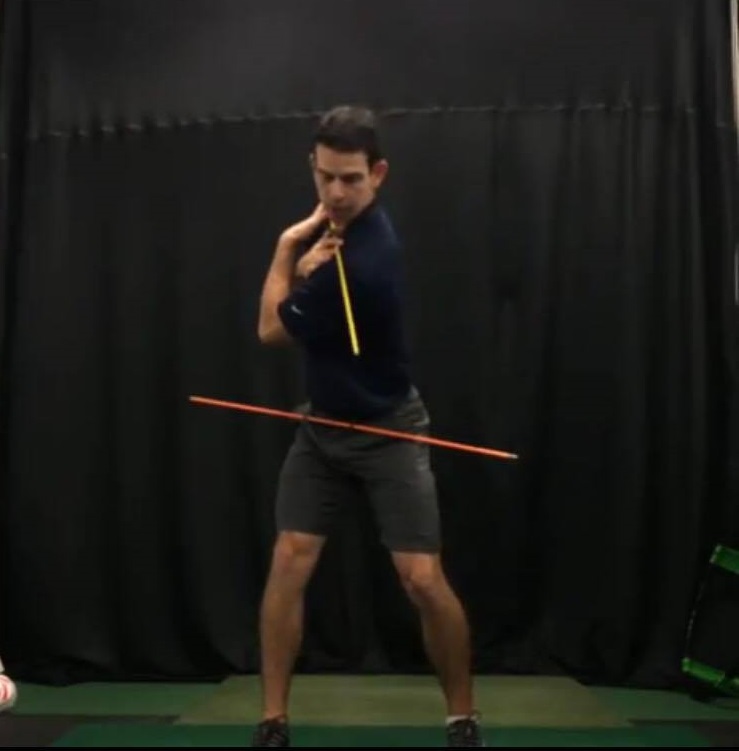 In the second part of the Power Essentials Series, I will explore the X-Factor in the backswing. The first installment of this series on power generation can be found here: Power Essentials Part 1: Ground Force & Leg Strength.

To get the bad joke out of the way immediately….No I’m not going to write about the X-Factor TV show.

X-Factor (XF) is a much talked about and debated measure in the golf instruction world and even though you may have never heard of the term, you already know what it is. XF is simply the difference between torso rotation and pelvis rotation at the top of the back swing. Some people may refer to it as the difference between shoulder turn and hip turn.

The term “X-Factor”was popularised by the famous golf instructor Jim McClean in a 1992 edition of Golf Magazine.

The difference between the yellow stick (shoulders), and orange stick (hips) in the picture on right is the “X-Factor”

Mclean reported that the bigger the size of the X-factor,  at the top of the backswing, the longer the distance of the shot. McLean compared five professional golfers with an average tour driving distance ranking of 19th (long hitters) with 5 players who had an average driving distance rank of 161st (short hitters). It was found that the total turn of the shoulders or hips was not important but the X-factor at the top of the backswing was. The long hitters had an average X-factor of 38o compared to the short hitters whose average X-factor was 24o (Mclean 1992).

The scientific research on XF at the top of the backswing is conflicting. There are some papers showing a correlation between XF and club head speed, and others showing that it’s not significant. What seems to be more important is something called X-Factor Stretch, which is the increase in X-Factor at the start of the downswing. This is when the lower body initiates the downswing and the pelvis rotates towards the target, as the shoulders are still rotating away from the target in the backswing. This will be covered in Part 3 of this series.

The rationale for the X-Factor is explained by something called the “stretch-shortening cycle” (SSC). The SSC explains the type of muscular contractions that are taking place, and how muscles can use elastic energy to improve force production. It is well known that muscles can produce more force if they are pre-loaded with stretch before a contraction.  The vertical jump is a perfect example of this. We can jump higher if we squat down and rapidly change direction before jumping compared to if squatt down – pause for a number of seconds – then jump. Rapidly stretching muscles that are about to be used, loads them (and the tendons) with elastic energy that can be expressed as we jump.

Javelin throwers know all about elastic energy. Big stretch of the trunk and torso muscles before ripping it forward.The golf swing works in a similar fashion. During the backswing some of the muscles of the the thighs, hips, trunk, torso, and shoulders are stretched or pre-loaded, which enables a more powerful contraction in the downswing. This “loading” is something that higher handicap players / short hitters don’t tend to do very well. The good news is that it is trainable. There is a great mobility drill in the video below if if you struggle with this.

The importance of the X-Factor is STRONGLY disputed in the golf instruction world, and many teachers believe the more XF at the top of the back swing, the more stress there is on the lower back. The biggest area of debate is whether the lower body should resist rotation in the back swing, or if it should freely rotate.

I’m not a golf instructor and won’t pretend to be one, but this is as much about biomechanics, and athletic movement as it is the golf swing. For maximising club head speed I am definitely not in favour of a resisting lower body. For the vast majority of people this will lead to way too little hip and shoulder turn in the back swing making it very difficult to produce maximum power in the downswing. It will also put more stress on the lower back. I also like the left heel raising in the back swing, as it makes this much easier.

This doesn’t mean we don’t or shouldn’t create XF in the back swing. If we didn’t create XF, and our hips and shoulders turned the same amount we would just be spinning. This also doesn’t make any sense. Think of throwing a pitch, punching something, hitting a tennis forehand. We need a differential between our shoulders and hips to stretch the muscles of our torso. More might not equal better once we have a certain amount however, and maximising this differential shouldn’t be our focus. We can allow both our upper and lower bodies to rotate and still create XF. This will allow us create a big backswing turn, which gives plenty of time for speed to be produced in the downswing. This is a really important point: The more time we have to produce speed in the downswing, the easier it is to produce speed. Bigger turns and longer back swings give us more time to produce force on the downswing. This can obviously be taken too far and lead to issues which affect speed.

When we dive deeper into the the available golf research it clearly shows us that X-factor is not the main determining factor for generating high levels of club head speed, but it does play a part. As mentioned earlier, “X-factor Stretch”, which talks about the increase in shoulder and hip separation in transition from back swing to downswing will be discussed in the next post. This is when things get really interesting.

For now though, here is an exercise you can practice to improve your ability to turn. Regardless of your swing beliefs – thoracic rotation aka shoulder turn is not something you want to be limited in.

The seated position in this exercise stops you from turning your hips, isolating your thoracic spine and rib cage. I recommend about 5 reps each side, and it can be done as often as desired. To see improvements I recommend doing it at least every other day.

If you are really interested in taking your golf, fitness, and health to the next level, you might be interested in the
Fit For Golf App. Over 8000 golfers have gone through programs on the app. The workouts can be done from home or at the gym.