Are You Losing Club Head Speed? A Tale Of Two 70 Year Old Golfers 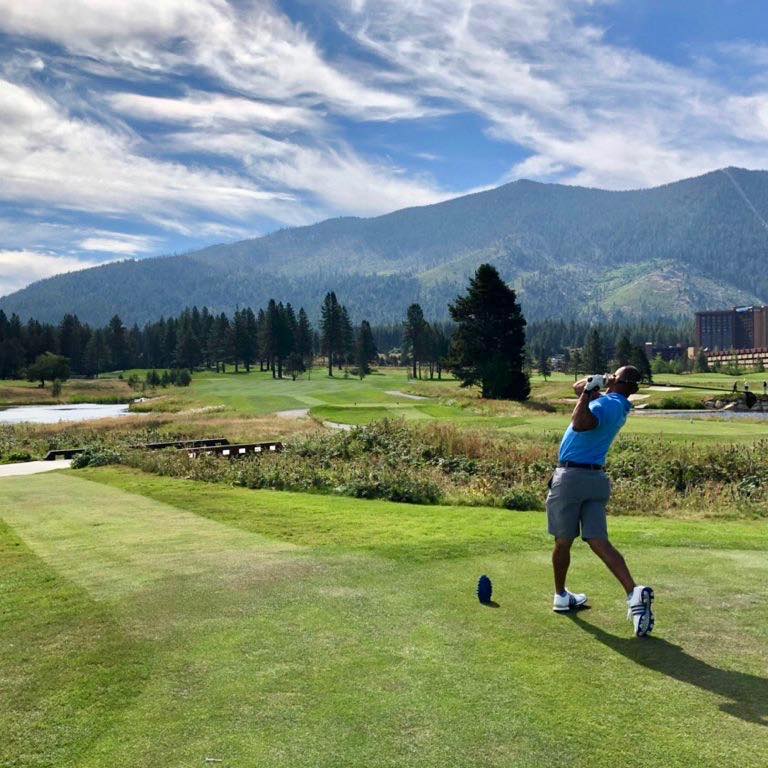 Many individuals just accept that they are losing club head speed as they age. It’s no secret most golfers significantly lose distance as they get older. Is the primary reason for this the year they were born, or are other (controllable) factors more significant?

Of course age is important, and a decline in physical qualities and distance is inevitable. The purpose of this article is to inform you that when this decline starts, how quickly it occurs, and the severity of it can be hugely manipulated.

We hit our natural physical prime for most athletic qualities by our late 20’s, we can maintain for a while, and then there will be a drop off.

Depending on our quality of training, diet, and lifestyle in general, this decrease in physical function can be a light drizzle or a monsoon.

I spend a lot of my time trying to enlighten people with the fact that chronological age is NOT the primary reason for the physical condition they are in and the reduction driving distance they have experienced.

It’s rather infuriating when somebody claims you “just lose” your club head speed, flexibility, power, strength etc at “X” age. Often times some arbitrary age between 50-65 is suggested, as if there is some switch that flicks when this age is reached. What this person doesn’t realise however, is that they are often just reflecting at what age this started happening to them.

When I dig a little deeper and ask them questions about their exercise/training, nutrition, and general lifestyle habits over the last number of years and decades, things become a lot more clear.

In most cases, it’s not the person’s age is the primary reason they are noticing they are losing club head speeed and physical capacities declining, but instead:

“The number of years of sedentary lifestyle, and poor habits since their natural physical peak”.

Many people confuse this number with chronological age, which is a separate (and uncontrollable) element. Everybody will have a natural physical peak, which can be maintained for a certain period, before a decline occurs.

THE LENGTH THIS PEAK CAN BE MAINTAINED AND THE RATE OF DROP OFF CAN BE HUGELY INFLUENCED BY YOUR ACTIONS!!!!

For comparison sake, let’s imagine two 70 year old golfers who back in the day went to college together. Both players were pretty athletic in school, played other sports, and did some gym work. In their 20’s when both players were in their “natural prime” they used to be able drive the ball 270 yards on a well struck shot, and leaving college they were both scratch handicaps.

The answer lies in how they have spent those years. Larry has always considered physical training as a non negotiable element of his schedule. He understood that if he wanted to enjoy his golf over the long term, keeping himself as athletic as he could with appropriate training to combat the biological effects of getting older would be important. He saw that at the golf club he played, some senior players seemed to be in great shape, while some others swings had decayed due to poor mobility, and very lower power levels. He knew which side of that fence he wanted to be on.

Golfer B, Dave on the other hand has not been as active. Once he left college and got busy with business, and having a family, he just “didn’t have much time for working out”. Interestingly, Larry and Dave have very similar business and family commitments, but they view how much time they have, and what they can do with it quite differently. Anyway, as Dave moved into his 30’s he noticed that he started getting a little bit less flexible, and his speed wasn’t quite where it once was. It turns out that sitting down for 70 hours per week between commuting, working an office job, and watching TV in the evenings and weekends isn’t particularly good for long term athleticism. Losing club head speed is inevitable with this type of lifestyle.

This trend continued for the next 20 years and fast forward to age 50, things have changed dramatically. Larry is still playing to a 2 handicap, and can hit it about 260. He’s not quite as fast as he was in his 20’s, but we must remember he also has three decades of pretty consistent training behind him. He doesn’t feel like other people at his age say they feel like at all. Dave on the other hand whom has slowly and consistently gained weight since college, now has a rather impressive pot belly to show off. His lower back gives him trouble, as he’s very tight and stiff from three decades of primarily sitting down, and maybe swinging a golf club a couple of times per week as his only training. His muscular condition or “tone” has almost completely deserted him. His handicap has risen to 6 and he drives it about 250. He’s a bit annoyed about this, as Larry used never hit it past him, and if anything he was a little more powerful. He’s still a pretty good player, but with his sore back, and energy levels often leaving him down on the back 9, he struggles to shoot the scores he used. (There is the whole host of health issues Dave will run into too). Dave can’t believe how quickly “age” catches up with you and in search to reclaim his lost yardage buys a $500 driver. It doesn’t help.

Fast forward 10 years later to, to when both players are 60, and things have kept going in the same vein. Another consistent decade of training for Larry, and while he has a slightly cranky shoulder and needs to be mindful of his knee, he’s still moving pretty well. He’s noticed it takes him a little bit longer to recover between workouts, he’s not quite as fast, and he can’t quite move the same weights he could in years previous, but he’s a force to be reckoned with for 60. He spent a bit more time researching how he could optimise his workouts based on his training experience, and age profile and has actually managed to regain some of the distance he lost a couple of years ago. He still hits it 255, and has maintained a 4 handicap. Unfortunately things have not gone so well for Dave. He has really started losing club head speed. He’s a bit down, because he used be pretty strong back in college when he lifted and used have some pretty impressive squat and bench press strength. He regularly voices his grievance about how “age is a b*itch” to anyone who will listen. As a result of his continued physical decline (which he likes to believe is is primarily because of how long he has been alive, as opposed to his choices), he can now only hit it 225. Yup, he’s lost 25 yards in 20 years. He has a good swing and hits it pretty straight, but his lack of mobility and especially power means there just isn’t much club head speed being generated. He’s now finding himself hitting hybrids into holes that used be middle and short irons, so his GIR have significantly reduced and he’s now playing to a 9 hcap.

You can probably guess what’s going on at 70. Larry, while still dedicated to his specific fitness plan, has definitely noticed he’s finding it very hard to improve his physical qualities. That’s to be expected though, we must remember he has 50 years of relatively consistent training behind him. The combination of age, and how long he has been training make improvement unlikely but he’s working very hard to maintain the impressive physical qualities he built in his previous training years. Sure, some years have been better than others and there has been some minor hiccups in regards to injuries along the way that have led to some time out, but he’s still loving golf and playing pretty well. He can still walk 18 no problem. His driver now only travels 250 on a well struck shot, and he fondly remembers the 260 and 270 days in years gone by. He’s content though. At 250 he can still play the regular tees and reach all the holes in regulation no problem. His slight decrease in mobility and power and subsequent distance has made it harder for him to score however, and he finds he can’t practice quite as much which has affected his sharpness. He now plays to a 7 handicap. Dave on the other hand is not enjoying his golf so much anymore. He started struggling with a shoulder issue and ended up having surgery on a damaged rotator cuff. It’s something that likely could have been avoided had he been taking care of himself, and due to his poor compliance with the rehab protocol prescribed to him he’s really struggling with it. He can’t make a full backswing, and if he tries to play two days in a row he’s in pain. This is the last thing he needed as he was already finding it tough to hit some of the longer par 4’s in two, and needed to hit woods into some of the par 3’s. He just can’t believe what happened between 50 and 70, and tells his younger playing partners “those are the years age starts to catch up with you”. Larry disagrees. Dave now plays off 11, but mostly just plays 9 holes as his enjoyment levels have dropped, and his energy levels don’t really cooperate with 18 hole rounds.

Remember, Larry and Dave are the same “age”, but I ask you, who is older?

Does this resonate with you? If so I’d love to hear from you. Please share with friends you think might benefit from reading it.

If this article did resonate with you, I want to make sure you understand it’s never too late to start taking ownership of your physical fitness and start making progress – regardless of whether you’re more like Larry or Dave from the story above.

I have received huge volumes of messages from golfers following programs on the Fit For Golf App in their 50’s,60’s,70’s and even 80’s detailing how much better they feel, and how much further the ball is flying. I can assure you, regardless of your age or current fitness level, improvement can be made.

Get More Info About The Fit For Golf App

What are you doing today to make you more mobile, faster, and stronger tomorrow? You can do a little bit each day to get better, or you can do nothing and get a little worse. Both of these choices compound over time to create huge change. We have the choice if we want these changes to be positive or negative for our golf, fitness, and health. Losing club head speed is NOT inevitable.

P.S. Check me out on Twitter for daily workout, nutrition, and mobility advice!