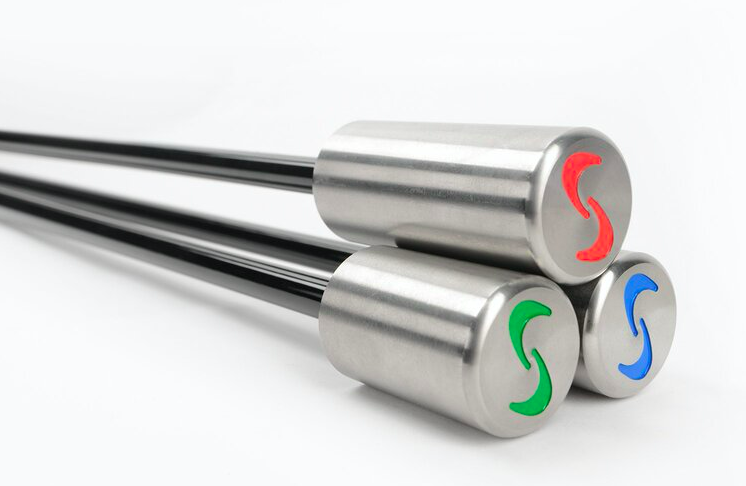 As golf analytics have made the advantages of distance abundantly clear, golfer’s of all levels are working on their club head speed. As a result the SuperSpeed Golf Speed sticks have become very popular, and rightly so. They are a fantastic tool, and worthy of inclusion as a tool in training programs.

Two common questions I get are “how fast should I expect to swing each stick compared to my driver?”, and “how fast do pro’s swing speed sticks?”

I asked SuperSpeed the first question and this is what they reported back to me:

Note that these will just be a guide, and there can be differences for different people. This is assuming a 100% effort swing with the sticks, and with the driver. The % differences I have observed with players is not quite as high as SuperSpeed’s guide but these numbers were also provided when SuperSpeed used the Sport Sensors Inc radar to record speeds, which measures a few mph higher than the now more popular PRGR radar.

Many people like comparing themselves to the pro’s and below is some data I have been tracking for a selection of the tour players I train and provide programs for.

A Note On Radars & Measurement:
There are two main radars that people use to track their club head speeds with the speed sticks and driver (when they don’t have access to a Trackman / FlightScope / Quad) . These are the PRGR radar from SuperSpeed Golf, and the Sport Sensors Inc radar.

The PRGR radar is very consistent and measures driver club head speed approximately 3-4 mph faster than a Trackman does in my experience.

The Sport Sensors Inc radar is quite inconsistent and can measure anywhere from 5-10 mph faster than a Trackman would. I had an ego checking experience last year! I had been tracking my club head speed with a Sport Sensors Inc radar on the range, and then went for a driver fitting on TrackMan, my stock swings were about 6-7 mph slower on Trackman! Since switching to the PRGR in my range sessions, I have been able to get much more consistent and relatable measurements.

This is important, because comparing speed stick numbers on a PRGR vs Sport Sensors Inc radar will not be the same, and comparing driver speeds on these radars to a Trackman or professional grade launch monitor will also be different.

Consistent & diligent monitoring is essential for your training.

* % Faster = the % faster each stick is compared to the player’s max driver on Trackman.

Breaking Down the Speed Stick Numbers

For the sake of brevity in this article I only included 5 players data, and it is clear to see there is some variance. In regards to the player who had blue and red sticks slower than his driver speed, this is quite unusual. I think this is due to him not really swinging the sticks as fast as he possibly can, as opposed to really being faster with his driver. I am confident that if he was offered $1m to swing his sticks faster, they would move up to the more expected ranges, like the other players demonstrated.

Don’t hone in too much on the variance between the different players, learn the keys to getting the most out of using speed sticks for YOU.

In my experience most players see big improvements with speed training both with sticks and driver initially. Most of this is due to learning to actually go 100%, rather than what the player perceives as 100%. When new to speed training what most players think is their maximum speed is really 90-95%. Learning to take off the hand break so to speak, and give 100% to a swing is an important skill that must be developed to maximally gain speed over time. It’s also hard work, and requires massive motivation and effort on each swing.

After a couple of weeks, improvements are generally very very slow and may seem non existent, but this is to be expected in already highly skilled players who have been swinging for most of their lives. It is essential to keep pushing and wait for a breakthrough. In less skilled players, who have never worked on speed before, improvements are usually quite linear for a number of weeks.

Remember practicing swinging as fast as possible is just one element of a comprehensive speed gaining plan. Making sure you are swinging with mechanics that create favourable movements for speed production, and developing your raw physical characteristics and qualities like mobility, muscle mass, muscle strength, and muscle power is also vitally important.

What About the Skill & Timing of Hitting a Ball?

Some people say that swinging speed sticks isn’t very beneficial because you aren’t developing the skill of hitting a ball. SuperSpeed deliberately made a product without a club head, and that didn’t hit balls so that people would be able to focus maximally on the speed of the swing.

It doesn’t take a genius to figure out there are potential benefits and limitations to both, and it was never supposed to be one versus the other. Obviously, a significant portion of your speed training needs to be hitting a golf ball with the golf club you will be hitting on the course with speed feedback. This is essential for coordination, timing, confidence, and actually finding out if you can use the speed you are developing in a playable manner. (The answer to this is usually, yes, but it takes lots of practice).

Nobody will argue that huge speed improvements can be made with hitting balls as hard as possible being the primary speed training focus. Bryson DeChambeau and Kyle Berkshire are two examples of players who have gained huge speed over the past couple of years without using speed sticks, but do hit thousands of drivers per month.

It is unequivocal that hitting balls needs to be the primary focus for maximising improvement, but I do think speed sticks have physiological, psychological, and practical reasons for being a great addition to your speed training however.

Our system craves variety to keep stimulating adaptation. The addition of slightly lighter sticks / clubs that allow us to move faster than we are used to, and the addition of slightly heavier sticks we cannot swing quite as fast provide this variation, while still being an extremely specific stimulus. Lighter and faster swings train us to get comfortable moving faster than we are used to, and heavier swings that slow us down a little bit give us more time to produce force, and increase strength.

100m sprinters do not just run 100m in training to try and improve their sprint times. Many of them perform some of their sprinting being pulled by bungee cords to allow them get used to sprinting faster, and also sprint against weight sleds or uphill which slows them down to develop some strength. Shot putters throw standard, lighter, and heavier shots in their training. Pitchers and cricket bowlers train with standard, lighter, and heavier balls. It’s all the same principle. Lighter and faster to become comfortable at faster speeds and “teach the brain what it feels like to move faster” + heavier and slightly slower to help us develop some strength. We can get the same effect in golf with lighter and heavier clubs. A key point here is that not just any amount heavier or lighter will work, it needs to be within a specific range compared to the actual golf club used for maximum benefits. SuperSpeed seems to have done a great job of this.

Key point: While heavier implements will mean slower swings, this is because of the extra load. Even though they will move slower, we must try to move them as fast as possible!

In advanced athletes progress can be very very slow. It can be stationary for long periods, and can also go through periods of regression, even when they are “doing everything right”. Improvements in advanced athletes is extremely difficult. Olympians can dedicate 4 years of their lives preparing for an event and not see a personal record improve in that time span. None of us are as advanced as Olympians, but the longer you have been training sensibly and the more advanced you are the harder it gets to improve. If we just use driver club head speed as our sole metric of improvement it can be mentally tough if there are weeks or months without improvement. Only getting feedback from one metric may also lead to use missing out on potentially valuable training information.

When we add the monitoring of speed sticks we now have 4 personal records to track, which can be extremely motivating. While the driver speed is still the ultimate goal, we need to have some alternative ways of informing us if training is moving in the right direction. These are often termed KPI’s – Key Performance Indicators. These are things that are closely linked to the metric we are trying to improve. With the professional golfers I train, I use speed sticks as KPI’s. For example if a player has increased their personal record by 5 mph on each stick, but their driver speed has not had a corresponding increase, I am reasonably confident the issue is not due to physical capabilities. The ability to swing faster is there as they have proven with the sticks, they just aren’t expressing it when hitting a ball with their driver. The player may be lacking confidence, have more of a focus on mechanical thoughts when swinging the driver hitting a ball, or just isn’t swinging with the same effort, resulting in him / her not seeing all of their speed potential show up. If we were just tracking the driver, we would be less informed as to how the overall training plan was going, as we would be relying on one sole metric that has lots of variables which influence the speed from swing to swing. On the flip side if driver speed is remaining constant or has gone down, and speed stick numbers aren’t budging, or are going down, it is likely a sign the training plan is not working and needs to be adjusted, or the player is dealing with fatigue, stress, lifestyle issues etc. Diligent tracking of your driver speed sessions, on course data (if available), and your KPI’s means these adjustments can be made as quickly as possible.

The biggest barrier to speed work hitting balls, is of course needing space, and something to hit the balls into. If you have a net set up in your home, fantastic. If not speed sticks can be a great “fill the gap” measure for home and recreational use. I have swung speed sticks on my balcony, on tennis courts, at the local park, in racquetball alleys, gyms etc. Having a beneficial system you can use to work on your speed, and track, without the need to hit balls is a huge plus for time and space / facility availability reasons.

I think the biggest gains are to be made with the clubs you use on the course and hitting a ball, as this skill needs to be the priority, but there is no question that the sticks can be a huge addition to your program. I hope this article sheds some light on how to best use them, and helps you can some speed!

If you want to buy Speed Sticks or a PRGR Radar you can get 10% off with the code fitforgolf21 on the SuperSpeed website. (Works on US and UK websites)

If you are interested in a comprehensive physical development system, trusted by over a dozen touring professionals and thousands of amateurs, that integrates mobility, strength, and power work from home or at the gym, SuperSpeed sticks, plus club head speed training with your own clubs, check out the
Fit For Golf App. You can get a one month trial for just $6 with the code FFGTRIAL.